“Not all inequalities are created equal.” So goes one of the main takeaway messages from the Dialogue on Inequalities recently held in Istanbul.

Yet we still use only one indicator—the Gini coefficient of income inequality—to judge them all.

All men, brother Gallio, wish to live happily, but are dull at perceiving exactly what it is that makes life happy (Seneca)
Life cannot be defined by income, just as quality of life cannot be measured with how much one get.

Yes, access to a good education and health care does matter. And different countries in the world have very different models of provision for these things. On the one side of the spectrum are heavily market-oriented countries, like the USA, Singapore and Hong Kong. On the other side, one could find such countries relying on state in public goods provision, as Sweden, France and Germany. Therefore, social inequalities are as worthy of discussion as the Gini.

Just look at Belgium and Bangladesh: They share, besides their first letter, a similar level of income inequality with a Gini index of 33. But when it comes to social inequalities, in education and health, Bangladesh performs four times worse than Belgium.

Shared society
Perhaps what matters even more than income inequalities is the sense of shared society.

Singapore is a free market society, number one in “Doing Business” ranking, second in “Economic Freedom” score, with a very low tax rate. Not surprisingly, income inequality is quite high there, with a Gini score around 45.

However, Lee Kwan Yew, the founding father of modern Singapore seems to have managed “to give every citizen a stake in the country and its future.” People in Singapore trust each other and state institutions, and only a few would call for more equal income redistribution.

In contrast, countries in our region, despite relatively low income inequalities, do not perform well on this front. Recent findings highlight that in the most of the countries surveyed, the majority of people do not think that their interests are represented by the National Parliament or the regional and local administrations. Hence, one could suggest that this lack of shared society perhaps hurts people much more than differences in incomes. 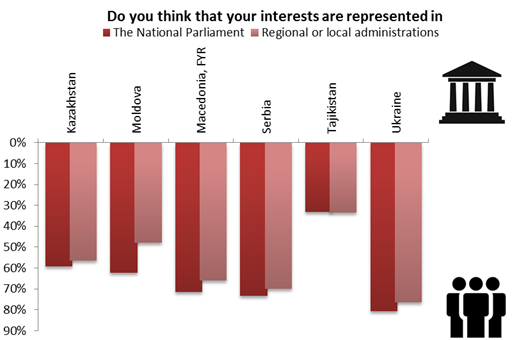 Source: Own calculations based on Regional Human Development Report, 2011

So how do we measure inequalities?

These days, inequalities are quite high on the development agenda.

So far, the proposal does not offer indicators for goals and targets. This could be an opportune moment to say goodbye to Gini and welcome some newcomers. In that case, keeping in mind what I’ve discussed above, let’s review some alternatives:

Finally, the World Bank offers a similar indicator, the Human Opportunities Index (HOI), which looks at how access to different opportunities—education, water, sanitation, etc—is distributed in a society. This could help us uncover how access to a particular right may be quite unequal across groups of children (urban boys vis-à-vis rural girls, for example).

All models are wrong, but some are useful. It is time to move away from relying on the Gini coefficient – and towards more useful indicators of inequality to distinguish between the good, the bad and the ugly inequalities. More equitable world we all want should not end up as the kingdom of uravnilovka and suppressing people desire and ability to take part in development.

Join #TalkInequality conversation at Twitter. Have look on slides from presentation at “Dialogue on Inequality” meeting.

Twenty years ago Rio Summit raised global issues of ecological concerns and sustainability. This year Rio+20 conference will take an overview of past two decades and suggest program for the future we want.

One of the issues related to ecology and sustainability is measurement. This is not just a matter of curiosity, to establish «sustainable development goals» we should have good enough metrics and indicators of sustainable development (as someone nicely put it «You never have to be ‘absolutely sure’ of something. Being ‘reasonably certain’ is enough»). Unfortunately, until now we have no commonly agreed set of indicators or one «sustainable human development index», despite of many efforts in this area—WorldBank Adjusted Net Savings, Yale Environmental Sustainability Index, UNU Human Sustainable Development Index, just to mention few.

One principal issue in «sustainable development» measurement, in my mind, is conceptual non-clarity what exactly are measuring: development or sustainability? And what sustainability means? If we would like to have «sustainable [human] development index», it should take both—achieved level of development and ability to sustain achieved level. Looking to either of these aspects is not enough. One could get high on «development» scale, but it says nothing about possibility to go on with this achievements (resemble Greece current crisis, isn’t it?). On the other hand, lower level of «development» could lay on more solid ground, which make it more sustainable. 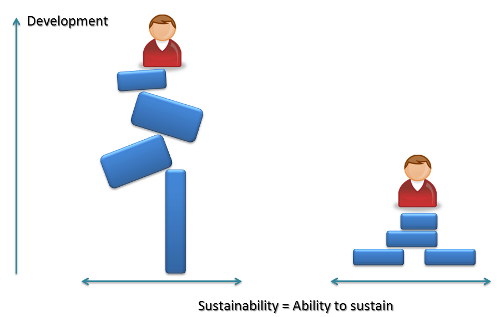 In the framework of Rio+20, Armenia is organizing side event to discuss possible options for Sustainable Development Index Methodology. We helped armenian team in structuring the approach to sustainable HDI in the light of recent development—changes in HDI index introduced in 2010, and extended approach to sustainability, which goes beyond ecological aspects only.

We started work with stepping back and asking a number of big questions:

Without properly addressing these questions, one could risk to end up with strange figures in hands and unexpected interpretation of index. The resulting proposal for Sustainable Human Development Index answer all of them.

In design of Sustainable Human Development Index we decided to give priority to national relevance, while keeping in mind necessity for international (or at least regional) comparisons. We decided to take a broad approach to sustainability, looking on ability to sustain not only natural environment, but also economic and social ones. Fourth dimension was added to the Human Development Index, to incorporate state of environment, as we value «ability to live in clean and balanced natural environment», in the same way we value abilities to «live long and healthy life», «being educated and having access to knowledge», and «enjoying decent standards of living». Resulting Extended Human Development Index (EHDI) includes only indicators of status of natural environment in five areas: quality of water, quality of air, state of soils, state of biodiversity, and habitat. This index says us what we achieved, without saying how it was achieved.

To answer the question how it was achieved and if we could maintain achievements, we added separate tier to the index—sustainability. Indicators in this tier says about ability to sustain achieved level (i.e. do we have debt big enough to threat our current wealth?) in all four dimensions of human development (including natural environment). These indicators penalize or reduce achieved level—if you have extremely high water withdrawal level your currently nice environment will disappear, as it happened with the Aral Sea. Resulting index is Affordable Human Development Index (AHDI), which should be judged against Extended Human Development Index (EHDI), looking how big is part of development (what we achieved), which is lost due to non-sustainability (how we achieved). The same approach is used, by the way, in Inequality-adjusted Human Development Index (IHDI), where HDI achievements (what) are penalized for inequalities (how).

«Yes, but…»—the question you will hear all the time you present some indicator or index. Indeed the broad picture of the world cannot be captured in one indicators or index, however perfect it could be. To put indexes in broader context, we included a broader set of «context» indicators—how much Government spend on education, health, environment? Do country have environmental protection institutions? What is the quality of education (as judged by PISA test results)? These things are very important, but are not hard enough to make their way into index.

Clearly, there are many questions to address to be ‘reasonably certain’ about the index. Trends in index, cross-country comparisons, approach to CO2 emission and energy efficiency of economies are just few of them.

This is a short outline of approach to sustainable human development measurement, which will be presented at Armenia side event at Rio+20 conference, alongside with calculations for a number of countries in Europe and Central Asia Region. I hope to see more developments in this area after the Rio+20 conference.

This article is also available in Russian.