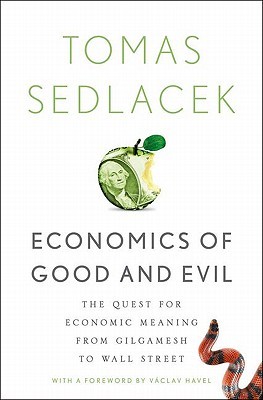 Economics of Good and Evil: The Quest for Economic Meaning from Gilgamesh to Wall Street by Tomáš Sedláček

The guy drives me crazy trying to persuade that gender equality is much higher at distant districts of that (quite patriarchal) country, than in capital. The best argument he uses “econometrics shows this, and you know, math doesn’t lie”. When we run down devils in details, it turned out that the guy used share if girls among higher education students as a metrics of gender equality. In distant districts higher education facilities are limited to medical and pedagogical ones, overpopulated by girls. Contrary, in the capital there is much broader set of education institutions, including technical ones preferred by boys, and share of girls is naturally lower. Wrong implicit assumptions lead to wrong results, despite of all that ubersophisticated math.

Tomáš Sedláček tells that story, but on a bigger scale. Currently, we hide implicit assumptions behind sophisticated formulas of economics (which more and more is limited to econometrics). Math replaced ethics in economic debates, based on assumption that math is value-neutral. However, this is very recent development. Over centuries economic though was inseparable from ethics, moral philosophy. In this book author walk through the long history, analyzing sources as old as Gilgamesh and the Old Testament, coming to the Greek philosophers, continuing to Christian economics, and then to Enlightenment ages, and finally the Wall Street. The book is well written and easy to read. While I don’t agree with several arguments, it is thought provoking and very useful.

To my surprise, there is not much Wall Street in the book, while Crash 2008 could be a very good case study. Intricate econometrics and math models simply hide the basic assumption that property prices will rise forever. As soon as this assumption turned out be false, and prices stagnated and slightly went down, all models went crazy and market crashed. On the other hand, author pay some attention to Debt, which is a great issue going well beyond Public Debt.