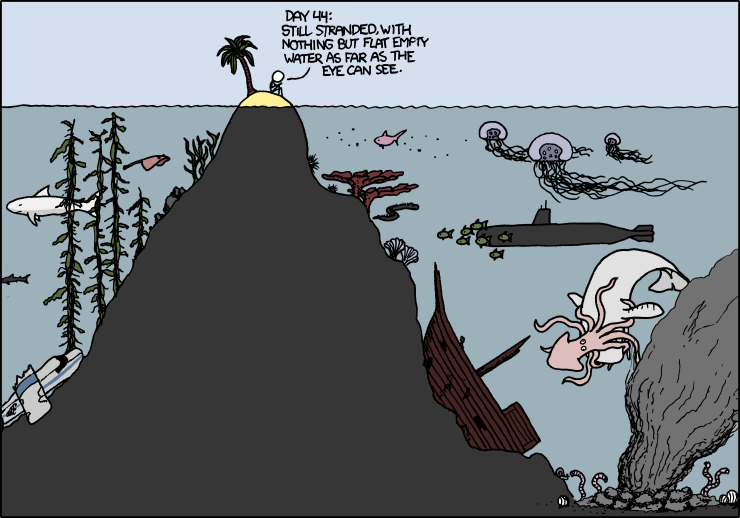 While sitting on a beautiful hill and overlooking the tranquil expanse of water, it is difficult to notice the pulse of life there, in the depths. Sometimes on the surface appear ripple-like patterns from whales’ tails or submarine periscopes, which could provide only a sketchy idea of the life in depths. Over time, scientists have created a number of tools to explore the depths, which fall into one of two large groups. In the first case, we catch a particular instance from the abysmal depths and study it in details. However, we do not care how numerous are such specimens, how they interact in the ecosystem and so on. In the second case, we consider the system as a whole — we track shoals of fish, water flow or distribution of volcanic emissions. In that case, we care little to none what happens to specific instances, we are interested in macro-phenomena.

In the social sciences, we use exactly the same tools — roughly speaking, case studies and statistics, each having their own pros and cons.
Case studies (focus groups, in-depth interviews and other similar methods) allow looking deeper into the problem, describing it in detail and in colors, highlighting some features that are difficult to see otherwise. However, such stories are not representative, and reflect the particular specific case. We have too many variables in our society, and it is too hard to pick a «typical representative» (try to find «a typical representative of your country» or «a typical country in Central Asia»), and there is no guarantee that that his or her experience would be typical.

On the other hand, namely statistics, operating with large numbers, can highlight the typical cases, trends and other average values, by which you can judge a society as a whole. The trouble is that most of these indicators gives an understanding of underwater life, roughly speaking, by ripple-like patterns from whales’ tails or submarine periscopes. Razor of research hypotheses completely cuts out the flesh of meaning from the bones of numbers.

There are numerous and repeated attempts to befriend a variety of tools that would give us understanding what’s going on in the depths of society. For example, the article «Managing Yourself: Zoom In, Zoom Out», published in the Harvard Business Review, offers a very simple approach — zoom in or out of the problem as a map in Google Maps. When the map is zoomed out, one can see the mountain ridges, state borders and big highways. When the map is zoomed in, these are dropped out of sight, but one can distinguish individual neighborhoods, streets, and houses. At zoom out one can see the problem in context, while zooming in allow to see important details that are blurred in zoom out.

Mapping of a sample of stories from the referenced
critical incidents project on one of the triad
questions used in the project (US Pat. 8,031,201).

Cognitive Edge offers a similar tool, which brings together stories, «micro-narratives» and the meta-data about these stories. In this case, research hypotheses do not play a major role. Certain «patterns» of stories begin to emerge when a large number of stories is collected and plotted around certain metadata options — whether the story about the past, present, or future? Is the story about corruption, cooperation or competition? In this case, accuracy of the sample is not so important — whether in the cluster 400 or 401 story does not matter at all. What is more important is appearance of such a cluster. It is possible to go in more deeply analysis, using the layers of clusters by adding variables — demographic characteristics of the storytellers, the emotional background of stories, and so on. Moreover, the tool allows you to «dive» deep into the cluster and catch the specific history, thus merging the statistics and personal experience .

This combination is very useful — politicians and decision makers rarely hear the voice of the people, relying on public opinion studies, and other average values. Using this tool allow one, sitting on the hill, to observe the beat of life at all stages of program or project — analysis, design , implementation, monitoring and evaluation.
This article is also featured in Voices from Eurasia, available in Russian.