Turbulent events of history leave sharp marks in demographic structure. Demographic history could tell us a lot about historical events…providing we could get necessary data. Demographic portal recently start offering access to relatively long time series for a broad range of countries. It also offers possibility to construct heatmaps of mortality changes (detailed description is available in Russian), which is an excellent tool for tracking historical changes.
Chart for Russia 1959-2010 (male) is clearly shows heavy impact of 1990s. The blood-red spot shows increased mortality in all ages, especially in working age–consequences of transitional shock.  One could also note positive impact of Gorbachev’s anti-alcohol campaign, a blue spot around 1985. It shows declining mortality of working age men. Unfortunately campaign was not long enough (and not very well implemented). 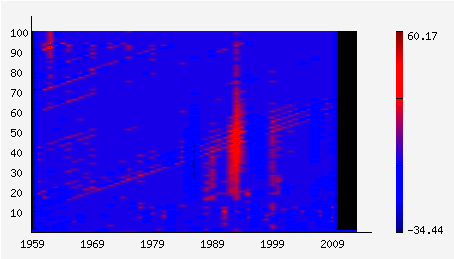 France 1900-2010 clearly shows two red cradles of mortality hikes during WWI and WWII and more or less monotonous decline of mortality for the rest of period.

Human history and societies left many question open—why Haiti and the Dominican Republic, which share the very same island of Hispaniola, are so radically different in their level of development? Why expansion of Western Territories in USA in 19th century was so explosive? Is it unique? What condition level of political development in Polynesian societies? How slave trade has affected long-term development perspectives of Africa?

Social scientists find themselves in disadvantaged position, comparing to natural scientists, physicians, or chemists—they have no luxury to run a controlled laboratory experiments, often considered to be the hallmark of the scientific method. On the one hand, they often deal with past. On the other hand, even if they could design such an experiment, it would be immoral and illegal. To make things even worse, social phenomena often are hard to measure (for instance, what are the measures for “happiness”, “development” or “stability”?) and involve many variables, which affect outcome. (Back in 1987 Jared Diamond wrote an excellent article “Soft sciences are often harder than hard sciences”, where he touch upon some of the issues).

However, Mother Nature often times offers her helping hand, in the form of “natural experiments”—serendipitous situations, when systems or groups are similar in many respects, but are affected differently by a treatment, random or quasi-random. This allows comparing two systems or groups and studying influence of the treatment factor. “Natural Experiments of History” is a collection of eight comparative studies drawn from history, archeology, business studies, economics, economic history, geography, and political science.

Book is easy to read and it is extremely thought-provoking. It offers broad sample of approaches to comparative history, using range of methods—from nonquantitative to statistical, range of compared subjects—from two in development Hispaniola island case to 233 areas in India, range of temporal comparisons—from past to contemporary societies, and wide geographic coverage. Behind all cases there is one simple idea—comparative analysis of natural experiments can be applied to the messy realities of human history, politics, culture, economics and the environment.

Short summary of all chapters is available on-line. Many chapters in this book are based on research papers, which could provide additional information about research methods used.