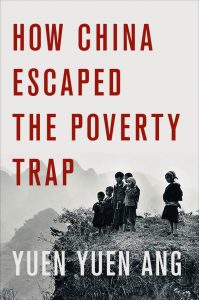 How China Escaped the Poverty Trap by Yuen Yuen Ang

There is no shortage of ‘best practices’ or ‘one-size-fits-all’ solutions in a development economy. Free trade, democracy, institution building, you name it. The Washington Consensus has reigned in the decades since the 1990s. Now the Beijing consensus is emerging.

Yuen Yuen Ang dismisses such solutions and suggests that there is no universal prescription. Her one-sentence summary is “Poor and weak countries can escape the poverty trap by first building markets with weak institutions and, more fundamentally, by crafting environments that facilitate improvisation among the relevant players.” She explores this idea through studying how China managed to achieve and sustain economic development after Mao. The country employed this approach, which allowed the to achievement of economic growth in complex circumstances. Yuen Yuen Ang call this approach ‘directed improvisation’ where central reformers direct and local state agents improvise. It taps local knowledge and adapts to the local circumstances, while aiming at an overarching goal. The resulting transformative process has displayed three distinct patterns. It is broad, bringing systemic changes despite incremental reforms. It is bold, unusually entrepreneurial but also attracts corruption-prone bureaucrats. Finally, it is uneven, with wide regional disparities coexisting with national prosperity.

The Government nurtured what Yuen Yuen Ang calls ‘directed innovation’ through variation, selection and niche creation. To promote variation, central reformers allowed local agents to flexibly implement central mandates according to local conditions. This has been done through deliberate creation of grey zones, as too much leeway could create chaos. Hence, Central bodies clearly delineated these zones of local improvisation. They imposed red lines around local administration, denoting things which are prohibited and risk very severe punishments; and black lines for things which must be delivered, again at the risk of severe punishment in the case of non-performance. The rest was in a grey zone, open for innovation and adaptation to local conditions. Selection was promoted by clearly defining and rewarding success within bureaucracy, of the type in the black lines discussed above. Central reformers clearly communicated the criteria for success to lower levels and ranked localities, and closely looked for what has worked and what didn’t. Successful models and approaches then became central policy, scaled up and replicated throughout China. For instance, the famous Township and Village Enterprises (TVEs) were neither prescribed, nor anticipated by central reformers, as Deng Xiaoping himself admitted. They grew up out of local experimentation at that stage of the reforms, as best fit to local needs and conditions, to produce growth spurts, and centrally imposed restrictions for the of non-acceptability of private property. The diversity of China provided the raw material for innovation, resulting in niche creation for different localities. Regional diversity thus turned from liability into a collective advantage.

The methodology Yuen Yuen Ang used is a mapping of the ‘coevolutionary process’, with whole Chapter (1) and Annex (A) devoted to the description of the methodology. She does not engage into construction of sophisticated regression models, torturing data in the elusive quest for causality out of correlation. Neither does she stick to small N approach, looking through messy and overcomplicated set of variable for a single case (By the way, enquiring reader could find great discussion of cultural differences between small N versus big N approaches in “A Tale of Two Cultures: Qualitative and Quantitative Research in the Social Sciences” by Gary Goertz and James Mahoney). Hence, no oversimplification and no messy non-reductionist approach to complexity. Rather, a complex approach, which captures a non-linear, co-evolutionary process, in reduced form. She tracks changes in the related systems of economy and institutions, over the time. Throughout the book, she dives into examples of Forest Hill, Blessed County and Humble County in China, which are archetypes of various types of localities in China. In her methodological annex she extends this approach to two additional cases of tax-less finance in United States of America in the 1880s and raise of Nollywood in Nigeria.

The three ‘I’s haunting development economics, according to Esther Duflo, are a conceiving Ideology, often derived out of Ignorance, that is perpetuated as a result of Inertia (see also “Poor Economics: A Radical Rethinking of the Way to Fight Global Poverty” by Abhijit Banerjee and Esther Duflo). More and more we do recognize the complex nature of issues we face with, the inadequacy of opaque models pushing correlation for causality, and the lack of Silver Bullet solutions. However, we are yet to find the instruments for handling complexity in a meaningful way. The book by Yuen Yuen Ang is an excellent starting point for this intellectual inquiry.